Multiple myeloma is a blood cancer of white blood cells called plasma cells. Plasma cells come from the bone marrow and they produce antibodies (also called immunoglobulins) that fight wide variety of infections. In myeloma, one of these antibodies grows out of control in the bone marrow, crowding out the other antibodies. This is called a monoclonal protein (also called M-protein or M-spike). 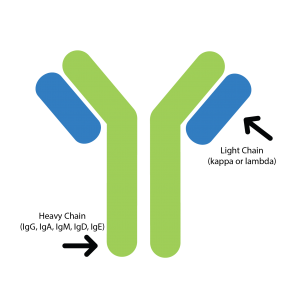 Antibodies are made up of two parts: heavy chains and light chains. When myeloma progresses, the myeloma cells start to produce more light chains than heavy chains. This can be measured by the Free Light Chain Assay test on a blood specimen. In general, the higher the free light chains, the more aggressive the disease is. Therefore, the serum free light chain test is a better predictor of outcome than the amount of M-protein in the blood.

What are light chains?

There are two types of light chains: kappa and lambda. If a patient has kappa myeloma, their doctor will watch for a rise in the kappa numbers. Likewise, if a patient has lambda myeloma, the lambda number will be watched. This balance of kappa and lambda together is called the kappa/lambda ratio which can also indicate a change in levels of disease. "The ratio or proportion between the kappa and lambda light chains indicates an excess production of one chain over the other, and therefore can be used as an indication of disease progression or remission," said Dr. Christina Gasparetto of Duke University.

What are heavy chains?

There are five types of immunoglobulins: IgG, IgA, IgM, IgE and IgD. Approximately 60-70% of patients have IgG myeloma and about 20% have IgA myeloma.

Presence of heavy and light chains

Does this type of light chain matter for my prognosis?

Generally, myeloma specialists do not treat patients differently based on their heavy or light chain myeloma type. There is research showing that lambda myeloma may be higher risk than kappa myeloma. The serum free light chain test can be used to determine light chain levels of disease, so patients will want to track their light chain numbers.

Additional genetic testing of a patient's myeloma cells can be done to determine risk based on common genetic myeloma features.

My lab results include kappa and lambda light chain ratios