LEHI — In the days and weeks after being told she had multiple myeloma, Jenny Ahlstrom was forced to make a decision regarding her treatment.

It's no different for anyone facing a terminal disease.

"It took me three years to get up to speed on the science behind myeloma and patients who have a high-risk disease don't often have that luxury," she said. "They need to make an immediate treatment decision right when their life feels like it has fallen apart."

The diagnosis itself is often life-shattering, yet patients like Ahlstrom must then know what to do to stop whatever it is that is quickly eating away at their lives.

"There's no way you can become accustomed to that idea of somebody telling you in the middle of your mothering that you have a terminal cancer that is typical for a 72-year-old man," she said, adding that the life expectancy for someone with her condition was a little more than two years at the time.

"It was complete shellshock. You don't know what to do with that," she said. "And, all of a sudden, you're supposed to pick a treatment protocol within weeks that is supposed to save your life."

That struggle to know what to do next led the Utah couple to create HealthTree, a nonprofit patient-based research database, where cancer patients can share their health information in hopes of helping others with the disease and, ultimately, finding a cure.

The family, including six young children, had just completed a difficult, international move to Mexico and were acclimatizing well while Paul Ahlstrom began building a venture capital firm there. In the summer of 2010, during a "break" spent in the states, Jenny Ahlstrom visited a doctor for issues that had been plaguing her for months, maybe even years.

"From my last pregnancy on, I did not feel the same," she recalls. Her youngest at the time was 2.

Test results revealed extensive bone damage — holes throughout her pelvis and spine — because of a complex cancer that affects plasma cells in the bone marrow that are responsible for coordinating the body's immune system.

Multiple myeloma was threatening to take her life.

An initial visit to a general oncologist in Utah revealed a seemingly simple and relatively painless treatment protocol during which the mother of six "wouldn't even lose my hair," she said.

She can laugh about it now, but at the time, her hair was the least of their worries.

Having been through a difficult and "traumatizing experience" with another family member who died from leukemia just 12 months after his diagnosis, the Ahlstroms didn't want to go down that road again.

"I wanted to hit it as hard as we could up front," Jenny Ahlstrom said. She didn't want to die and leave her kids — her most precious endeavors — without a mother.

The type of treatment she didn't know she needed included two rounds of rigorous stem cell transplants and would have been preferred only by a specialist, a doctor who treats patients with one type of cancer.

"This is a very complex cancer. It's fast moving. It morphs," said Paul Ahlstrom. "General oncologists don't have the time to stay up to speed."

It was something they learned the hard way when they lost their brother more than a decade ago.

"They're doing the best they can, I just don't know how they can keep it all straight," Jenny Ahlstrom said. "I mean, you're asking them to do an impossible task."

Through their journey, the Ahlstroms, who now live in Sandy, were told that up to 15 percent of patients with myeloma were being cured, but no one knew exactly why or how. And Jenny Ahlstrom wanted to be part of that club.

"That sparked the idea for HealthTree," said Paul Ahlstrom, who also helped to build Ancestry.com. "This is the tool we wish we would've had when Jenny was diagnosed."

"If we can connect ancestors and live people together, why can't we connect patients?" he said. And that led to the entire family helping to find a cure for the cancer that is slowly eating away at their wife and mother.

They developed HealthTree under the umbrella of the CrowdCare Foundation they first established and where MyelomaCrowd and ALSCrowd platforms already exist for patients to find disease-specific information. HealthTree just gives patients an extra hand in directing their own treatment. 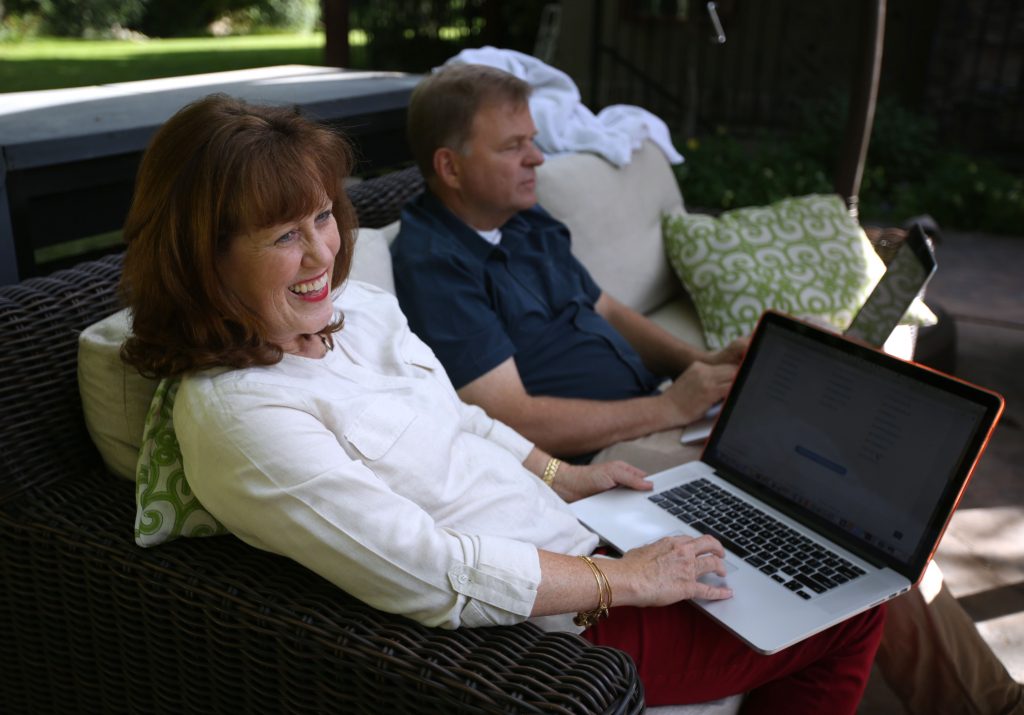 "It's only because patients are willing to share their experiences in all sorts of ways, not just the genetics of the disease, but their lifestyle, their quality of life, their emotional status being on different treatment options, and more, because that impacts your immune system and your ability to continue wanting to fight cancer," Jenny Ahlstrom said.

Her husband said they built the system to not only connect patients, but to organize them for the use of others facing the same life-changing questions she did. 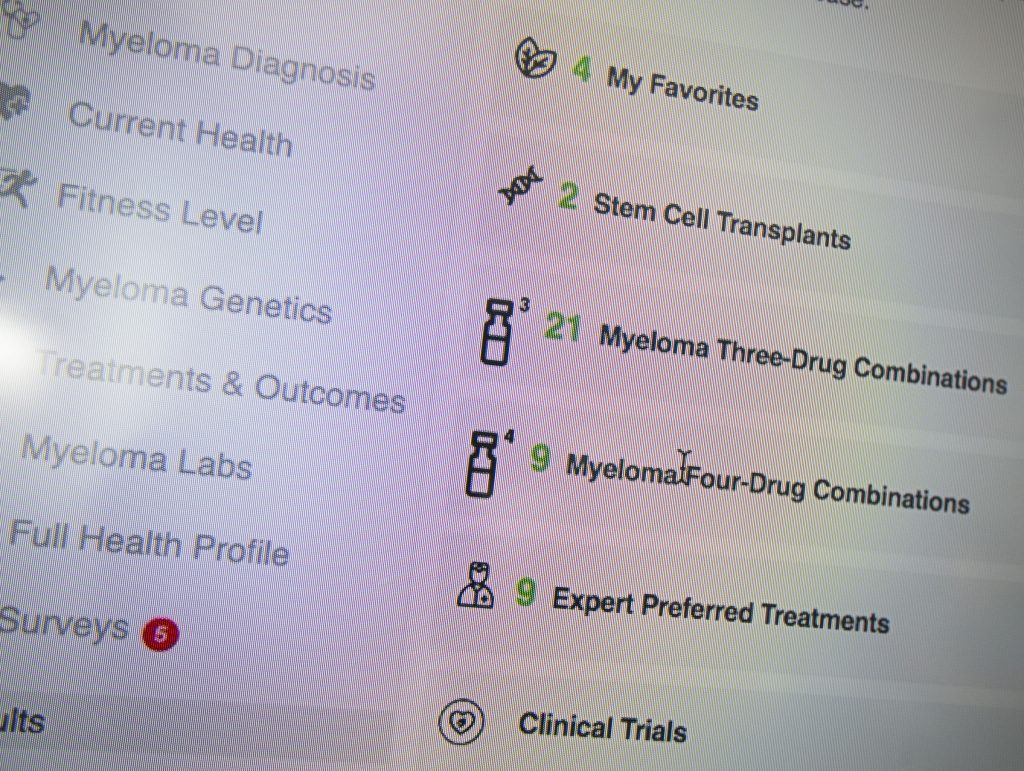 HealthTree will not monetize or keep patient data, and patients can remove their information at any time, but the more that is available, the more conclusions can be drawn and doctors can start spotting trends resulting from various treatments, which could possibly lead to a cure.

The software also connects patients to clinical trials for which they might be eligible, making that search much easier and more viable, which also helps researchers uncover more options for treatment.

The National Institutes of Health, an agency of the U.S. Department of Health, estimates about 5 percent of adult cancer patients enroll in clinical trials even though 70 percent of Americans are estimated to be willing to participate. At the time of her diagnosis, Jenny Ahlstrom was aware of at least 1,400 ongoing clinical trials associated with multiple myeloma, and 540 of them were openly recruiting. She reached out to eight of them and was contacted by two. 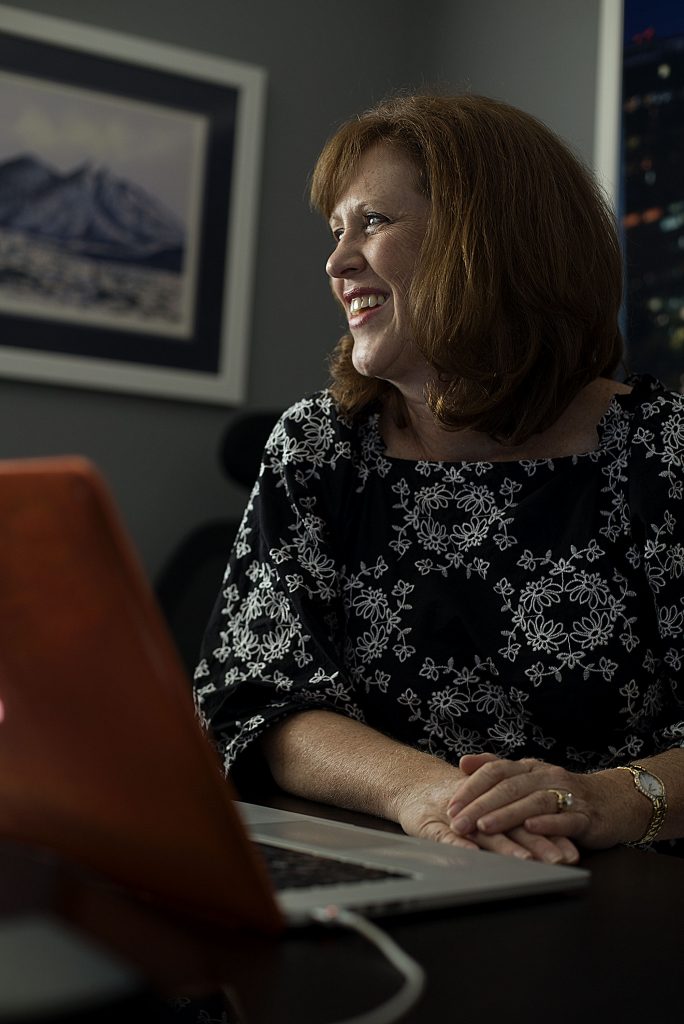 Jenny Ahlstrom, who is battling myeloma cancer, has launched a platform where patients of the rare but deadly type of multiple myeloma can share treatment strategies. Photograph taken in Lehi on Thursday, June 28, 2018.

"You're already stressed and feel terrible and you're getting constant rejection from something you don't even know will work for you," Paul Ahlstrom said. "It's just not a great system."

With HealthTree, patients can upload their own information, including the various treatments they endured and how successful they were, side effects they encountered, demographics and lifestyle particulars, as well as myriad other data pertaining to their experience with myeloma. And HealthTree, a nonprofit patient-centered database, will aggregate the information to help others in the same boat and maybe even lead to a cure for myeloma.

"And if we can do it with myeloma, we can do it for other cancers and other conditions," Jenny Ahlstrom said, adding that she's been hungry for information about her condition since the day she was given her diagnosis.

Clinical trials, though she supports them whole-heartedly, just take too much time to produce the results cancer patients often need immediately. And the health care system, she said, "really isn't aligned for cures."

When taking on new patients, doctors must corroborate medical histories from multiple locations and visits throughout a person's life, requiring quite a time commitment. The Ahlstroms' HealthTree program compiles pertinent information quickly and gives doctors a glimpse at what they're dealing with from the get-go.

"As caregivers and patients, we are totally empowered to share our data with anybody we want," Jenny Ahlstrom said.

Dealing with the disease

Online support groups are incredibly popular and provide help to many who are searching for answers, but none of the data shared in those groups is categorized or very useful in the long term. Adding to the problem, myeloma affects different people differently.

"Having cancer is not an attractive thing," she said. She ended up staying in Utah while her family returned to Mexico and her mothering, albeit limited, had to be done from afar.

"It turns out, it takes a lot of different people to replace a mom," Paul Ahlstrom said, laughing about the driver, cook, housekeeper, gardener and nanny he ended up employing for over a year while his wife endured her treatment.

"Jenny's job was to get better, so we took away all of the responsibilities she would have had to worry about," he said. The couple is aware of how unique their situation may have been and feel very blessed to have had the opportunity to attack the cancer the way they did.

But that didn't mean it was easy.

"I had to make a very proactive effort to stay emotionally positive," she said, adding that the music she listened to, the books she read and the people she spent time with, each had to be uplifting. "And I had to pray a lot."

They also felt the power of hundreds of people, even strangers in another country, praying for them.

"It's given us immense perspective and a new opportunity to do things we couldn't do before and serve in ways that were not possible before," Paul Ahlstrom said. "You have true empathy and understanding for what people are going through."

"I appreciate everything," Jenny Ahlstrom said. "Small things don't bother me because the big things are worth caring for. Our family culture is now all about solving big problems, being outward-focused and service-oriented. I've given it my all."

Starting the foundation and being proactive about her care and the care of others has become her therapy.

"That's how I stay positive with my disease, because with myeloma, you're never done," she said. "The stress is always there. You can always feel it."

Being a terminal illness without a cure, multiple myeloma will eventually take her life.

So finding a cure has become her life. Jenny Ahlstrom volunteers all her time to the foundation and doesn't take a salary. She can't wait for the day when she can shut it down.

"We can create a collaborative community … and work on a cure together," she said.

She believes it will happen in her lifetime, however long or short that is. Her monthly blood test results are creeping into dangerous categories, but it has already been eight years of learning and growing and bringing people together to fight.

"Jenny wouldn't be around right now if we had started that treatment the general oncologist recommended," Paul Ahlstrom said. "She would have relapsed two or three times by now and may not be sitting here today."

Definitely not the outcome for which he's devoted so much time and resources.

"Hopefully we both live into our 100s together," he said. "Wouldn't that be great?"

He kissed her on the forehead as he left their shared office for another obligation.