The current standard of care for myeloma patients who are transplant-eligible is to use a triplet combination therapy (like a proteasome inhibitor, lenalidomide and dex) as "induction" therapy and then have a stem cell transplant. With all we've heard about minimal residual disease, some doctors try to get their patients to the lowest possible disease level before heading to transplant and give a second line of treatment to deepen responses. A recent paper at the ASH 2017 conference by researchers at the John Theurer Cancer Center in New Jersey shows that patients should head directly to transplant instead of trying to deepen responses with a second combo. The second treatment could actually provide worse outcomes if transplant is delayed.   In the study, 496 myeloma patients who received autologous stem cell transplant were reviewed. These 496 patients received 596 transplants during a 10 year period (2005 - 2015). The median age was 61 and 26% had high risk features and the median time from diagnosis to transplant was 7 months. The analysis looked at many factors related to overall survival: age, disease type, stage and risk, pre-transplant dialysis, induction regimen, mobilization regimen, time to transplantation, transplantation regimen, CD34+ cell dose collected and administered, engraftment syndrome, response pre and post transplantation, and number of transplants. Patients who did have disease that continued to grow during the induction therapy (also called progressive disease or PD) had worse outcomes. But the results showed no difference in overall survival for patients who had a variety of responses to this induction therapy (complete response, very good partial response, partial response, stable disease). These results applied to all patients in the study including standard and high risk patients. Of the 11 patients who had progressive disease following first-line therapy, only one still had progressive disease after subsequent lines of treatment. But of the 437 patients who were not in progressive disease after first-line therapy, 29 evolved to progressive disease during treatments designed to deepen response. Having progressive disease before transplant indicates worse outcomes. Researchers conclude that only patients who already had progressive disease should continue to a second-line therapy. Everyone else who has stable disease or myeloma that responds in any way to the induction therapy at some level should not wait for their disease to progress and should proceed to stem cell transplant. 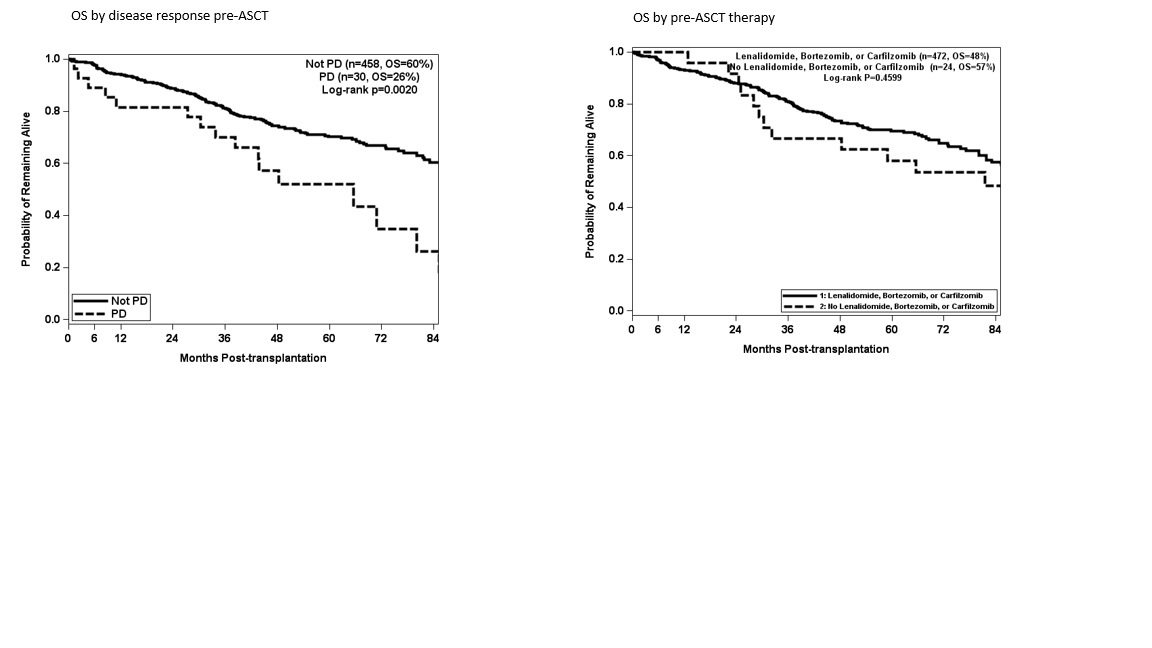