Sam's daughter writes, "In May 2021, my otherwise fit and healthy 74-year-old father, Sam Thomas, was diagnosed with acute myeloid leukemia (AML). Over the next four and a half months, he received many transfusions of hemoglobin and platelets. Each time, he referred to them—in his writing and in our conversations—as “the gift of life”. Despite the challenges of treating AML among older patients, my father was astounded that something as simple as blood donation could have such a positive impact on his health. He was deeply grateful to the anonymous givers who saved his life, over and over again.

My father was an urban planner, a writer and podcaster, and he wrote extensively about what it was like to be diagnosed with a terminal illness. He hoped that his writing would help other AML patients think about their lives and put their diagnosis in perspective. Before his death in in September 2021 he asked me, his daughter, to help share his writing. I am sharing an excerpt from his writing on blood donations, below, which he wrote in July 2021."

Today I received my fourth gift of hemoglobin. I’ve also had transfusions of platelets, three of those, so that’s seven transfusions in the last four weeks of blood products. This has proved to me to be the greatest relatively routine gift that can be given from one human being to another. It’s a transfer of the magic liquid which keeps us alive. Without it, or if it is seriously degraded as in my case of acute myeloid leukemia with cancer crowding out my good blood cells in my bone marrow, life becomes precarious at best, and ceases at worst.

In my younger days, I was an anonymous donator of blood myself. The first time I gave blood was because I was convinced by co-workers that it was ‘the thing to do’. It was a bit scary the first time, but because my co-workers were in adjacent giving beds, I felt that I was in good company. Some were giving because they had family members who had benefited from it, and that helped convince some of us who’d not had that experience. In reality there was a multitude of reasons why I gave. Perhaps it was part of my awareness of the human condition and how precarious life can be but how it can be maintained with this magical liquid. Maybe it was the looking ahead to realise that I might one day need this, thus establishing my camaraderie with the wider human population. We all need blood, and it can be transferred from one person to another. This is amazing when you think about it.

I was told I have blood type A Rhesus Negative, and I was told that my donation was therefore particularly important as it was relatively rare. And blood type matching is crucial. Transfuse the wrong blood type into someone, and their blood clashes with the donation, creating serious havoc and coagulation, negating the benefit of the donation and even causing death of the recipient. It’s like choosing the right Christmas present for the receiver, only a lot more serious.

Giving was relatively easy when you got into it. Lie on a bed, nurse finds your vein, tiny prick of hollow needle allows blood to flow from vein to tube connected to needle. It was really simple and quite painless in my case. Then lie there and let your blood flow into your personal collecting bag. It’s only a small portion of your blood you are giving and you can easily do without it while your bone marrow makes up the difference. I was told I was a ‘fast bleeder’, so I didn’t need to lie there very long until they had collected the amount required. I was told it would be processed before being given to anyone so that it would be turned into a number of blood products including hemoglobin and platelets.

I think I gave blood about seven times. In exchange for this gift, we got a cup of tea afterwards along with some cookies. My French wife tells me that when she gave in France in her youth, the givers got a glass of wine or beer and sandwiches, and even cigarettes (which would be anathema today).

So, go forward 45 years and I am now the recipient of blood products: hemoglobin and platelets. If you have ever had a low hemoglobin count, you will know without any shadow of a doubt, how important this fluid is to maintaining your life. When you have a low count, you can become quite breathless, and this is really scary. Hemoglobin carries oxygen to your organs. Starve them of oxygen, and you are gasping. Walking a very short distance leaves you feeling like you’ve been running scared from an invisible pursuer. The panic can be very debilitating, as well of course as the physical gasping for breath for even the smallest movements of your body. You wouldn’t believe how much oxygen your organs need for the basic movements of life. Just getting dressed can make you breathless.

Thanks to the marvelous gift of blood transfusions, I have had the most wonderful experiences of going in the short space of a couple of hours from being breathless to being able to climb a small incline that I could never have done two hours before. That’s what happened to me today.

I was ushered to a chair, and the nurse used the heater to warm my right arm. She quickly found a vein, and I felt a very slight prick of the hollow needle, just exactly like the feeling I had when I gave blood all those years ago. Only this time, the fluid would be pumped in by the portable magic beeping pump on wheels ( so you can take it with you to the bathroom if necessary) rather than blood flowing out when you donate it. It’s really the reverse of giving blood. The pump ever so gently clicks away, pushing the fluid into your arm. There is no pain whatsoever, and I spent most of the time reading my book and responding to the best wishes of family and friends via my phone. I had one unit of hemoglobin which took two hours to pump in. Then I had some platelets which took half an hour to pump in.

The nurse carries the hemoglobin to you in a red insulated box, and this really signifies what a special gift this is. 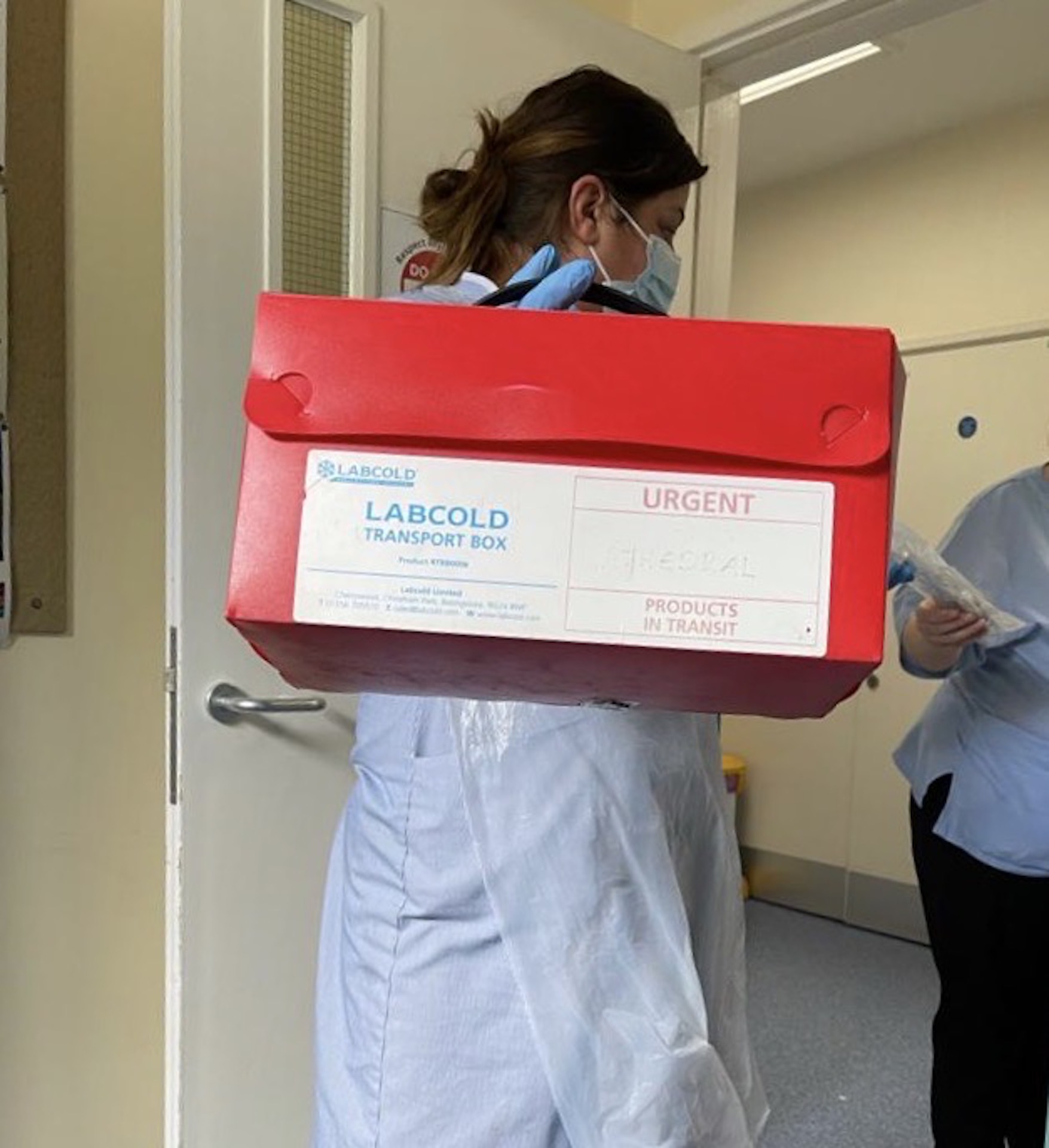 The nurses join together in checking that the hemoglobin is really intended especially for me. To use the Christmas gift analogy again, they are making sure it’s the right present for the right patient recipient. The bag inside the box gets hooked up on the pump, and then the hemoglobin starts going in, again totally painlessly. When the bag empties, the pump beeps, the bag is disconnected and the needle is removed from my arm.

And I am free to walk away, climb the little incline outside the building and off we go home. I’m able to breathe easily again, thanks to an anonymous giver of a most wonderful life-giving fluid which has made all the difference to extending my life. I am forever grateful to that wonderful person.

Blood Donations Save and Extend Lives

Consider sharing this article with as many people as you can to spread the word about how valuable and life-saving blood donations are. The American Red Cross is urgently looking for blood donations. You can search for a donation site near you using their website here.

Katie joined HealthTree as the Community Director for AML in 2021. She is a registered dietitian who previously worked at the VA hospital in Dallas, Texas where she coached veterans with blood cancer on how to use nutrition to improve their treatment outcomes and minimize cancer-related side effects. Katie is passionate about health education and patient empowerment. In her spare time, she loves to experiment with new recipes in the kitchen, spend time running outdoors and travel to new places.

What AML Taught Me in 2022
Blood Lines – Poetry to Celebrate Blood Cancer Awareness Month
I Once Had AML, But AML Never Had Me
Full Chapter Event: Lessons Learned as an AML Caregiver
Healing the Body and the Soul: Becoming a Patient Again
We’re Going to Take Your Blood Counts to Zero by Kenny Hall, AML and Stem Cell Transplant Survivor
See More